This morning’s devotional is an excerpt from “Will You Wrestle with God?” by Jon Bloom, Staff writer, desiringGod.org – the title is linked to the full article if you would like to read further.

Take note of what God did when he wrestled Jacob. Jacob began the night dreading Esau’s arrival. He was full of fear and desperation. But he ended the night of struggle with God’s blessing and a renewed faith. All of our struggling with God in faith leads to peace.
And isn’t it interesting that God did not simply speak to Jacob in a dream or vision as he had at other times (Genesis 31:13) and reiterate his promise and speak comforting words? This time God addressed Jacob’s fear by requiring him to wrestle all night. This probably felt to Jacob like a badly timed hassle when he just wanted comfort and assurance. But later he realized just how comforting it was. Sometimes when we want God’s comfort, he sends it in unexpected and even unwanted packages.

God even afflicted Jacob with a debilitating injury. This had the effect of making Jacob even more vulnerable to Esau, forcing Jacob’s faith to more fully rest on God and not himself. If necessary, God will cause us to limp to increase our faith.

Lastly, wrestling with God changed Jacob’s identity. He was no longer to be known as one who received his blessing by deception. This time he received God’s blessing by prevailing with God by faith. This struggle turned out to be a profoundly gracious gift of restoration that God gave Jacob, not unlike the gift Jesus gave Peter by letting Peter affirm his love for Jesus as many times as he had denied it (John 21:15–17). Jacob’s tenacious faith pleased God and he rewarded Jacob’s request (Hebrews 11:6). When God calls us to wrestle with him, there’s always more going on than we first understand and God always uses it to transform us for good.

God Wants to Bless You

When God makes us wrestle him for some blessing(s), it is not because God is reluctant to bless us, even if that’s how it first feels. It is because he has more blessings for us in the wrestling than without it.

Remember, God pursued Jacob for this match. God was the initiator. Jacob was stewing in his own anxiety over Esau and his approaching slaughter squad when God showed up. And the wrestling drew Jacob out of his fearful preoccupation and forced him to focus on God.

I doubt that Jacob wanted this forced focus or even believed he needed it at first. It wouldn’t surprise me if at the beginning Jacob had prayed, “God would you get rid of this guy? This is the last thing I need right now.” But what he discovered was that the wrestling was a means of God’s grace, a channel for God’s blessing on him.

The same is true for us. 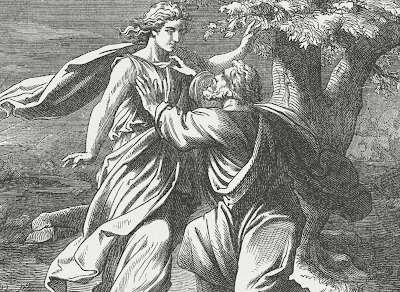