Skip to content
Luke 2:8-14
“And in the same region, there were shepherds out in the field, keeping watch over their flock by night. And an angel of the Lord appeared to them, and the glory of the Lord shone around them, and they were filled with great fear. And the angel said to them, “Fear not, for behold, I bring you good news of great joy that will be for all the people. For unto you is born this day in the city of David a Savior, who is Christ the Lord. And this will be a sign for you: you will find a baby wrapped in swaddling cloths and lying in a manger.” And suddenly there was with the angel a multitude of the heavenly host praising God and saying,
“Glory to God in the highest,
and on earth peace among those with whom he is pleased!”
It’s a common trope – a long line outside the hottest new club, populated by those hoping to be pretty enough, rich enough, or important enough to get the nod to get through the door to the party inside. We see this same thing at play early on in our own lives when we wait nervously to see where we’ll end up in the daily dodgeball pick – will it be first, second, third or last? We learn at a young age that this is the way the world works. There’s a pecking order, and you have to stand out from the pack to make the list. Your worth is tied to what you bring to the table, what you can do for me.
But Jesus – his message, ministry, and even his grand earthly entrance is characterized by the exact opposite dynamic. It makes no sense. Of all the people the angels could have shown up to, really? Shepherds? Was this a case of a supernatural singing telegram delivered to the wrong address? These men were not the cherubic Precious Moments figurines we’re familiar with this time of year. These folks were poor, ignorant, and smelly. They were the bottom of the barrel in the social order.
No, it was no mistake. If anything, it was a foreshadowing of one of the things that makes the “Good News” so good! God includes those who would never make the cut anywhere else. At the outset of his ministry, he chose young men to be his disciples that had already been passed over by the other rabbis. He took criticism for going to the wrong parties, spending time with the wrong people, and turning a religious order on its head that had become all about being “good enough.”
That is great news for us because none of us are worthy. As much as we try to put our best foot forward and present ourselves as having it all together, deep down we know there’s a little shepherd in all of us. But it’s in this context, seen as we truly are – broken and dirty, where God calls out to us. We are on His list. We are all invited to come and see this thing that has happened. We are invited to marvel, to celebrate, and then to go out and share what we’ve seen and experienced! 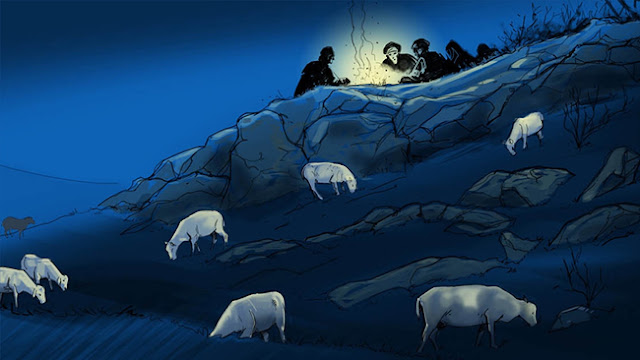