“And the messengers returned to Jacob, saying, “We came to your brother Esau, and he is coming to meet you, and there are four hundred men with him.” Then Jacob was greatly afraid and distressed. He divided the people who were with him, and the flocks and herds and camels, into two camps, thinking, “If Esau comes to the one camp and attacks it, then the camp that is left will escape.”

“Please deliver me from the hand of my brother, from the hand of Esau, for I fear him, that he may come and attack me, the mothers with the children. But you said, ‘I will surely do you good, and make your offspring as the sand of the sea, which cannot be numbered for multitude.’”

Last week my son and I were working in the garage. I was building some cabinets and he was “building” something at his little workbench. He is only three so the masterpiece he was building was some scrap wood and old toys piled together, covered in wood glue. By the time he was done he had glue all over his hands. Now, this boy of mine is a little OCD so when he realized the mess that was all over him, he started to panic, whine, and try to wipe the glue off his hands onto his shirt. Instead of coming to me for help, he decided to take matters into his own hands. And that did not work out so well for him.

This is a picture of how we sometimes handle difficult situations in our own lives. When things do not go as planned, we panic and try to figure it out on our own, instead of turning to the One who can and will help us through any situation we find ourselves in. This is exactly where we find Jacob today in the scriptures. Esau is on his way to meet Jacob, and he has 400 men with him! Jacob’s first thought is that Esau is still mad at him and is going to attack him. And for good reason. Rewind several chapters in Genesis and we learn that Jacob has tricked Esau out of his birthright and cheated him out of the blessing from their father, Isaac.

So now Jacob decides to split the people who were with him into two camps, so if Esau did attack one camp, the other would survive. After he tries to figure it out for himself, he then prays to God for safety. And in the end, Esau was not mad at Jacob at all. Genesis 33:4 says when Esau met Jacob, he “embraced him and fell on his neck and kissed him, and they wept.” Jacob wasted so much time and energy trying to prepare for something bad he thought was going to happen, instead of first trusting in the Lord and seeking His guidance.

Is there anything in your life that is giving you anxiety and fear right now? If there is, are you trying to handle it on your own, or are you seeking wisdom from God? He already knows what is best for you in every situation, all you have to do is ask and wait for his guidance.

Using the HEAR method, take some time with the passage above.

Highlight – what words or phrases jump out at you?
Explain – what does the passage mean?
Apply – how does the passage intersect with your life today?
Respond – how is God leading you to respond?
Brice Alumbaugh 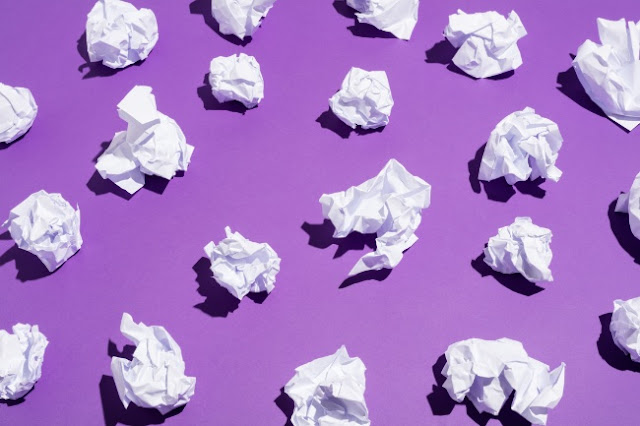 White balls of creased paper laying on the floor by photocreo www.elements.envato.com